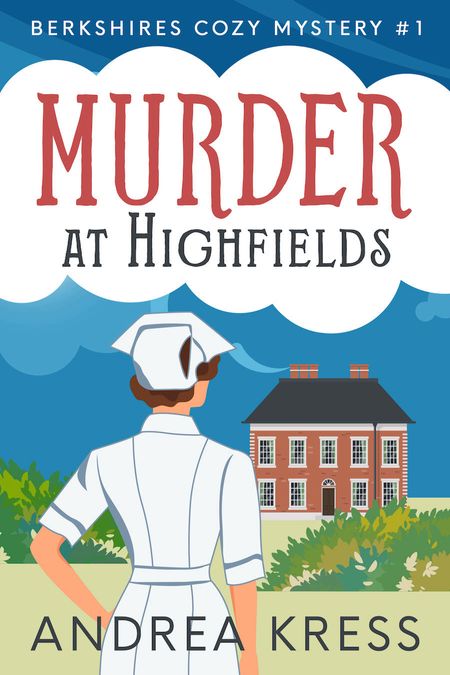 A newcomer freshly arrived. A body with a bullet. A welcome that just turned deadly…

Berkshire Mountains, Massachusetts, 1931. Aggie Burnside is ready for her next chapter. But when her New York job falls through unexpectedly, the registered nurse jumps at another opportunity and moves to her best friend’s hometown. Though she’s barely settled into the small community before she’s entangled in the local judge’s shocking murder.

With the dead man’s shooting going unheard in a house full of secrets and suspects, Aggie’s sharp curiosity pulls her deep into a long list of possible motives. But as a clueless inspector bungles the case and false leads muddle the investigation, the novice detective and her bestie sidekick step up to find the culprit before the evidence disappears forever.

Can Aggie get a confession before the killer escapes justice?

Murder at Highfields is the lively first book in the Berkshires Cozy mystery series. If you like good-hearted heroines, delightful doses of humor, and smart surprises, then you’ll love Andrea Kress’s fast-moving whodunit.

Buy Murder at Highfields to untangle a treacherous scheme today!

The jazz singer Lulu has plenty of admirers. So, who would want to kill her?

Lulu Evans makes quite a splash at the Mountain Aire hotel in 1931 when she fills in for her cousin. Not only is her performance jazzy and sexy, it delights the band director who sees financial success in his future. She also attracts the attention of a vacationing business mogul eager to back her, a Broadway producer looking for a new star, a struggling playwright in search of a muse, and a gaggle of lovestruck teenage boys.

Success breeds jealousy and rivalries, and one morning Lulu is found dead on the doorstep of one of her admirers. Nurse Aggie Burnside is called to help the doctor determine the cause of death but she can’t help herself from investigating who could have killed the young girl.

Can Aggie sort through the bogus alibis and motivations and get justice?

The Girl on the Doorstep is the fast-paced second book in the Berkshires Cozy mystery series. If you like good-hearted heroines, delightful doses of humor, and smart surprises, then you’ll love Andrea Kress’s classic whodunit.

An isolated mansion, an eccentric host, squabbling siblings, and a snowstorm. What could possibly go wrong?

Young nurse Aggie Burnside and her doctor boyfriend are asked for a holiday weekend in a remote mansion in Vermont to calm the nerves of the threatened owner. But their hostess, a wealthy widow and renowned romance writer has other plans for her guests. With a series of games, she hopes to reveal who is out to kill her, but to everyone’s shock, someone else dies first.

Revel in the atmosphere of a 1931 New England winter, the extravagant house, tales of a Scottish curse, sumptuous meals, and more suspects than you can shake a stick at. Will Aggie’s curiosity catch the killer or put her into more danger?

Christmas Recipe for Murder is the lively third book in the Berkshires Cozy mystery series. If you like good-hearted heroines, delightful doses of humor, and smart surprises, then you’ll love Andrea Kress’s fast-moving whodunit.